The Abu Dhabi World Professional Jiu-Jitsu Championship 2019 is open entry to all fighters from all nationalities.

The UAEJJF competition rules will be applied.

• The registration fee is non-refundable.

Exemption: Athletes who get injured or are alone in their bracket are eligible to receive a full refund of the registration fee if they contact [email protected] and request to withdraw their name from the competition prior to the weigh in checking date.

• The registration fee cannot be transferred to another member or championship

The draw will be carried out by computer with the use of the UAEJJF software using UAEJJF World Rank seeding.

For the Abu Dhabi World Professional Jiu-Jitsu Championships 2019 the top athletes among the entered athletes in each weight category will be placed per their UAEJJF World Rank position. For the rest of the draw separation by nations will be respected. However, seeding position will take priority over separation by nation in categories where there are enough numbers to apply.

With a limit number of fighters per country for each of the men’s and women’s competition, fighters from the same country will be placed on the same side of the brackets. The UAEJJF will utilize the official UAEJJF World Ranking as a method of brackets seeding.

All the fighters will be eligible for the Abu Dhabi World Professional Jiu-Jitsu Championship 2019, with a limit of 2 fighters from a given country to the eight or quarter or semi-finals (Adult & Master 1 - Brown and Black Belts divisions only). With a maximum of two eligible fighters (wild cards) from each country, applied for that countries does not already have two or more fighters among the top fighters ranked.

For other belts only the countries seeding will be applied and no country limits for main brackets.

If necessary, the UAEJJF Technical Director will agree to modify with technical commission approval.

Country Selection process for countries with over quota (2 Fighters* **):

*Priorities are given to the best ranked fighters to choose the division desired to register (weight category is not yet a determination).

** Fighters not ranked as a 1st at UAEJJF World Ranking in the respective division registered will be placed into the COUNTRY QUALIFIERS.

The second additional fighter will be qualified through the COUNTRY QUALIFIERS (Applied for ADULT & MASTER 1 - BROWN & BLACK BELT DIVISIONS only).

COUNTRY QUALIFIERS is a qualification method to select the 2nd fighter for the countries with over quota.

COUNTRY QUALIFIERS will be defined one day before of the 2nd round on Thursday (eight or quarter finals or semi finals), check the schedule TAB for more details.

The UAEJJF World Ranking is the mathematical method of ranking men and women on a calendar-year basis.

1. The UAEJJF World Ranking is the objective merit-based method used for determining qualification for entry and seeding in World Championships.

4. Fighters are not allowed to change their nationality or team academy during the season, due to the Country and Academy Ranking System.

The year-end UAEJJF Ranking is based on the total points for each fighter accrued in the following championships: 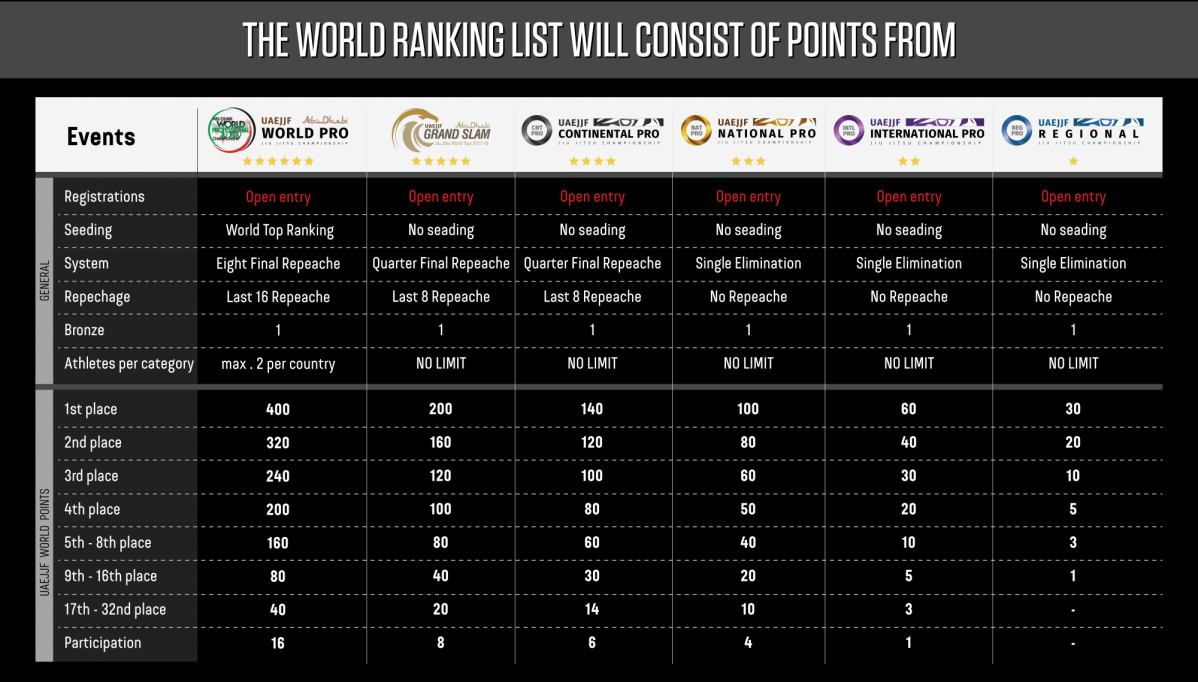 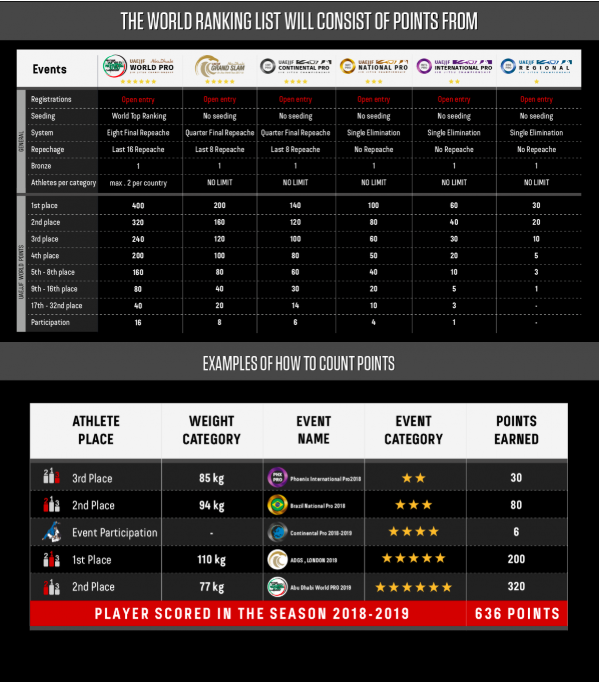 Tiebreaker rules in case the division has two fighters with the same rank:

In case the same number of points:

The weigh-in will take place the day before the division starts or in the morning as indicated in the schedule.

A basic summary of the Accreditation process is below:

Athletes may only weigh up and fight if they are carrying an official ID (identity document) Passport or Emirates ID with a photograph, otherwise the athlete will be disqualified

Weighing may be performed from one day before, one hour before or during the tournament (check tab schedule which one is applicable):

A maximum weight is applied according to the event divisions, a fighter should not exceed this weight on the weigh-in day (check divisions tab on this event).

White, blue and black gi are obligatory and its recommend competitors must have two types for finals. All GI must conform to the current UAEJJF regulations regarding size, materials, patches, etc.

The type of competitions system to be applied in the competition will depend on the number of entries as follows:

1 entry – no contest (or category combining / moving up fighters).

2 entries – best of three contests (or category combining). If it is 2-0 then the third contest will not be fought.

3 entries – round robin, pool of three (or category combining).

4 entries – round robin, pool of four.

5 entries – round robin, pool of five.

7 entries and above - Double elimination with eight finals repeache. The athletes defeated in the eighth finals will compete for bronze medal, single elimination system will be used to produce the third place.

PS: For Country Qualifiers Single elimination will be applied. After losing a match in the qualifier draw, a participant is out of the main brackets division and out of the competition.

If less than 6 fighters Round Robin will be used.

Over 7 fighters and above Double elimination will be used.

Runners up on the eight finals and quarter and semi finals, fight for 3rd place repechage.

Runners up are out of the competition

Only for Brown Belt and Black Belt (Adult and Master 1)

The Country Qualifier draw is a single elimination brackets that stops after a designated round. Fighters that have not been eliminated all advance to a specific spot in the main bracket where the champion is determined.

Competitors who qualify advance into another double elimination brackets know as the main draw, but for World Pro other draw formats can also be used as the main draw, round robin tournament brackets will be used if the divisions has less than 6 fighters from different countries that meet the first rules, a maximum of 2 fighters per country in the main brackets..

In the Brown Belt and Black Belt divisions (Adult and Master 1), higher ranked fighter do not have to fight in the qualifier draw and have a seeded spot in the main bracket.

The main draw that the qualifier draw feeds into has the top country seeded fighter that do not have to qualify matched-up against the lowest seeded qualifiers in early rounds.

The qualifier draw would be used in a ABU DHABI WORLD PROFESSIONAL JIU-JITSU CHAMPIONSHIP only and will not be used in other event in the UAEJJF season. Grand Slams, National Pro, International Pro will have no limits per country and will run as single elimination brackets.

Top fighters fights fewer matches. Top fights work hard to reach the points while other fighters has to qualify for their others spots. As the World Pro has 3 different days in length, having enough amount of rest time between the matches.

After losing a match in the qualifier draw, a participant is out of the main brackets division.

In the case of 6 competitors or less: a round robin system produces the gold and silver and one bronze for the 3rd place.

“Round Robin” Is defined as a system where each competitor will compete against each other.

To define the winners the following criteria are used:

2. Second criteria (in case of an equal number of wins): The highest sum of submissions will decide

3. Third criteria (in case of an equal number of wins): The highest sum of winning score points will decide.

5. Fifth criteria (in case of equal number of wins and no direct comparison possible because of “beating in circle”): The shortest accumulated time of all winning contests will decide

6. Sixth criteria (in case of equal time): Weight at the weigh-in. The competitor with the lower    weight is defined as better.

7. Seventh criteria (in case of same weight): Decision matches. A knock-out system between the involved players will be used. A new draw has to be performed.