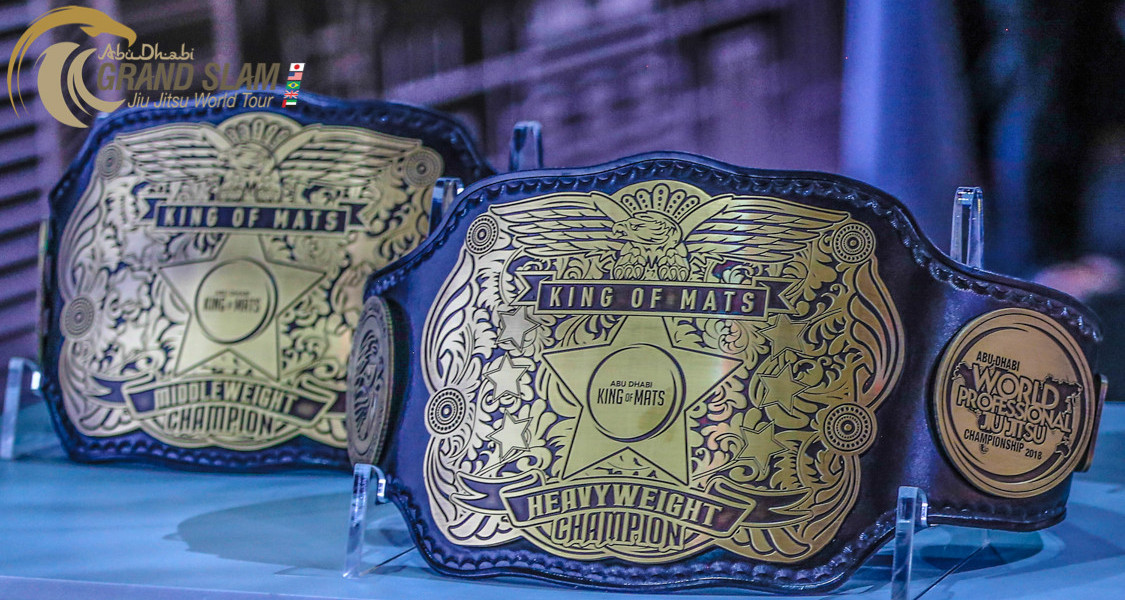 <p> The heavyweights set the mat on fire in Los Angeles this past September, when Erberth Santos secured his spot as King of Mats belt contender. Now it is time for the ten of the best middleweight competitors in the world to clash in Abu Dhabi for their chance to challenge the belt holder Charles Negromonte. The Abu Dhabi King Of Mats Middleweight bracket will kick off on Saturday, January 12, at the Mubadala Arena, as part of the Abu Dhabi Grand Slam Jiu-Jitsu World Tour. </p> <p> Who are the 10 warriors who will battle in Abu Dhabi? Here are quick bios of each one of the competitors. You will be able to watch all the action live online at <a href="https://www.flograppling.com/live/7504-2019-abu-dhabi-grand-slam-abu-dhabi/signup?utm_campaign=2019abudhabigrandslamabudhabi&amp;utm_medium=referral&amp;utm_source=email&amp;utm_content=email&amp;rtid=43482&amp;coverage_id=6250217"><b>FloGrappling</b></a>. For more info, click <b><a href="https://events.uaejjf.org/en/event/188">here</a></b>. Follow the complete coverage on our <a href="https://www.instagram.com/adwjjt/"><b>Instagram page</b></a>. </p> <p> <b>Gabriel Arges (Gracie Barra)</b> </p> <p> From Belo Horizonte, Brazil, Arges is one of the most accomplished competitors coming out of Romulo Barral's talent factory. At 25 years old, he just opened his own academy in Thousand Oaks, California, but he keeps very active in the competition scene. A two-time ADWPJJC champion (2015/2016), Arges is known for his guard game, specially the X and single-leg X and is a bog contender for the chance to fight for the belt. </p> <p> <b>Roberto Satoshi (Bonsai Japan)</b> </p> <p> Born in São Paulo, Brazil, Satoshi, now 29, comes from a rich lineage within Jiu-Jitsu. Son of the late Master Adilson de Souza, he and his brothers Mauricio Souza and Marcos Yoshio moved to Japan to teach the art in the country of their origins. Known for his power up routine before every match and his deadly guard game, Satoshi is very active in the competition circuit with great results. A two-time ADWPJJC champion (2012/2014), Satoshi will be a problem to each one of his opponents in Abu Dhabi . </p> <p> <b>Isaque Bahiense (Alliance)</b> </p> <p> From Rio de Janeiro, Brazil, Isaque Bahiense started his Jiu-Jitsu journey under Professor Fabio Andrade, as part of the Nova União squad. As a brown belt, he changed teams and joined Alliance under Professor Fabio Gurgel, where he eventually earned his black belt. At 23 years of age, Isaque has become one of the most accomplished competitors of his generation. A 2018 ADWPJJC champion, he will try to impose his guard passing game on every opponents. </p> <p> <b>Espen Mathiesen (Kimura/Nova União)</b> </p> <p> From Egersund, Norway, Mathiesen, now 23, came into the black belt scene with a boom. After great results in the lower belts, he had his great breakout at the 2018 ADWPJJC, with a powerful performance to win the 77kg division. A skillful guard player, Mathiesen will be a threat to all opponents. </p> <p> <b>Lucas “Hulk” Barbosa (Atos Jiu-Jitsu)</b> </p> <p> From Andre Galvão's den of champions in San Diego, Lucas Barbosa exploded in the competition circuit with very powerful performances and also a highly technical game. At 26 years of age, the Brazilian born in Boa Vista, Roraima, first made his presence felt in the lower belts, with a series of titles in important events. He is a 2015 ADWPJJC champion as a brown belt. After receiving his black belt, the level of performance remained steady and Lucas will make use of his well-rounded game to steamroll his opponents in Abu Dhabi. </p> <p> <b>Diego Ramalho (ZR Team)</b> </p> <p> From Recife, Brazil, Diego Ramalho is another upcoming talent out of Zé Radiola's black belt forge. Now living in California, he divides his time between competition training and teaching Jiu-Jitsu. At 25 years of age, Ramalho is a force to be reckon with at the middleweight division. With a strong game and dangerous attacks to the leg and feet of his opponents, he's been a familiar face on podiums throughout the current season. </p> <p> <b>Alan “Finfou” Nascimento (Checkmat)</b> </p> <p> At 36, Finfou is the most experienced of all competitors in the middleweight roster. He has competed against everyone and everywhere. Born in Niteroi, Brazil, Finfou got into Jiu-Jitsu under the legendary Fernando Tererê. Now living and teaching Jiu-Jitsu in Sweden, Finfou often travels to compete all over the world. He'll certainly bring his dangerous guard game to the mats in Abu Dhabi and it should be no surprise to anyone if he catches one or more opponents in his dreaded triangle chokes. </p> <p> <b>DJ Jackson (Team Lloyd Irvin)</b> </p> <p> The American of the group is a powerful wrestler with a intense game that relies on his impressive physical strength. From District Heights, Maryland, DJ Jackson, now 30, trained his whole career under Professor Lloyd Irvin. In Abu Dhabi, he'll take someone down, pass their guard and probably go for a kimura lock from side control. Just watch. </p> <p> <b>Manuel Ribamar (NS Brotherhood)</b> </p> <p> From Manaus, Brazil, Ribamar is one of the top talents of his generation with awesome results in tournaments all over the world. He developed under Professors Rodrigo Pinheiro and Cicero Costha, Ribamar established himself as one of the top contender in his weight class. With 25 years of age, he arrives in Abu Dhabi to make a serious dent in the competition with hopes of getting to the top. </p> <p> <b>Rudson Mateus (Caio Terra Association)</b> </p> <p> No arm is safe when Rudson Mateus is on the mat. Born in Manacapuru, Brazil, he shot through the competition scene like a rocket, achieving important results in the lower belts. As a black belt under the highly technical Caio Terra, Mateus only developed his game further. He's been very successful in the present season. In Abu Dhabi, he'll be a serious contender for the top spot in the middleweight bracket. </p>