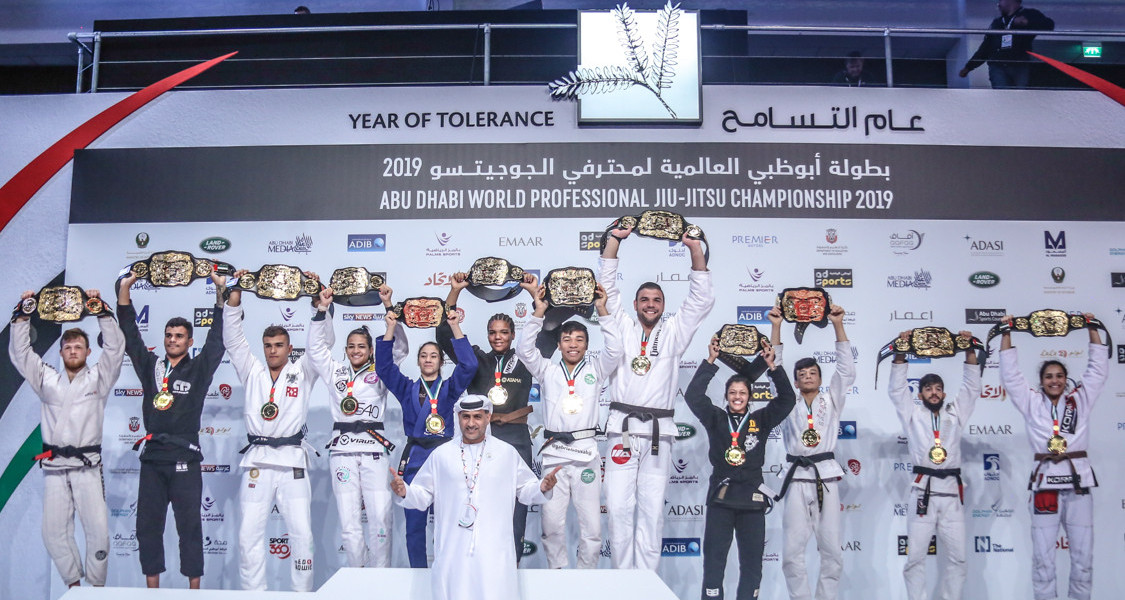 Fast and furious. The final day of the 2019 Abu Dhabi World Professional Jiu-Jitsu Championship, this Friday, April 26, took less than two hours for all the champions in the adult male black belt division and the adult female brown/black belt division to be known. In fast paced matches, the best competitors in the world claimed their spots on the top of the most prestigious podium in the world. Here's how each gold medal match played out.

56kg – Hiago George went down one weight class from his usual competition life to claim his first title in the black belt division. The final match against a very game Carlos Alberto Oliveira was decided by details. A 2-0 lead on advantages was the edge Hiago needed to celebrate the title.

62kg – What a season for João Gabriel Sousa. The ZR Team athlete finished the adult male black belt ranking in first place and also took the ADWPJJC belt home. In the gold medal match, he beat João Miyao 2-1 on advantages in a very strategic match. As the clock marked zero, Gabriel was finally able to burst in celebrations.

69kg – Back to back title for Paulo Miyao. After winning in 2018, Miyao repeated the result in 2019. The final was against well known and always tough rival Isaac Doederlein. A nail-biter, the match was decided by one penalty to Isaac that gave Miyao the edge after a 2-2 tie on points.

77kg – Norway is still on top in the division. After Espen Mathiesen's title in 2018, this time his fellow countryman Tommy Langaker claimed the gold medal. In the final, Langaker found a choke from the back to finish Britain's Oliver Lovell and make sure the belt stays in Scandinavia.

85kg – Rudson Mateus spoiled the home crowd's hopes of seeing a UAE gold medalist at last. Faisal Al Ketbi fought bravely and managed to take the match in a tie until the very end. With a 2-2 on points in the scoreboard, two out of the three referees decided in favor of Rudson, granting him his first gold medal as a black belt at the ADWPJJC.

94kg – Kaynan Duarte was on fire and the gold medal match was short-lived. He quickly found a leg lock to finish Adam Wardzinski and claim the gold medal and the belt, his first as a black belt at the ADWPJJC.

110kg – João Gabriel Rocha wasted no time to find his way to victory and his first gold medal as a black belt at the ADWPJJC. He worked his way to the back of Yahia Al Hammadi and finished the match with a choke.

49kg – Mayssa Bastos is the owner of the weight class at the ADWPJJC. With a 1-0 lead on advantages over Thamiris Aquino, she conquered her third belt in the brown/black belt division. No athlete has been able to dethrone Mayssa since the 49kg weight class was introduced in 2017.

55kg – Bia Basílio went down one weight class and was able to stay on the top. She won gold in the 62kg division in 2018, but decided to compete in the 55kg division in 2019. The final match was a close one against the reigning champion Amal Amjahid. A 4-2 lead on points was the edge that gave Bia her second belt in a row.

62kg – Beatriz Mesquita wanted to be back on top. After not making through the Brazilian Qualifiers in 2018, she came back this year with fiery eyes. The gold medal match saw Bia behind 2-0 in the scoreboard after Ffion Davies managed a sweep. With less than three minutes to go, Bia increased the pace and managed a sweep followed by a mount and back take to score 10 points and win 10-2. Mission accomplished.

70kg - Thamara Silva took the division by storm in the 2018/2019 season of the Abu Dhabi Grand Slam, winning four gold medals in five events. The grand finale came with the gold medal at the ADWPJJc, her first. She caught Alessandra Moss with an armbar to finish the match and celebrate an amazing season.

90kg – No other name was written in the first place spot of the 90kg weight class in the 2018/2019 season. Gabrieli Pessanha won all five ADGS events and finished in awesome fashion with gold at the ADWPJJC. In the final, she caught Claire-France Thevenon with a triangle to seal the deal.

The 2019 ADWPJJC is in the history books. It marks the end of the 2018/2019 season. Click here for the full results. Relive the thrills with the play by play coverage on Instagram at @uaejjf and @ajptour. The 2019/2020 season will be underway shortly with the first big event scheduled June 15-16, as the Abu Dhabi Grand Slam Jiu-Jitsu World Tour lands in Moscow, Russia. Click here for more info.