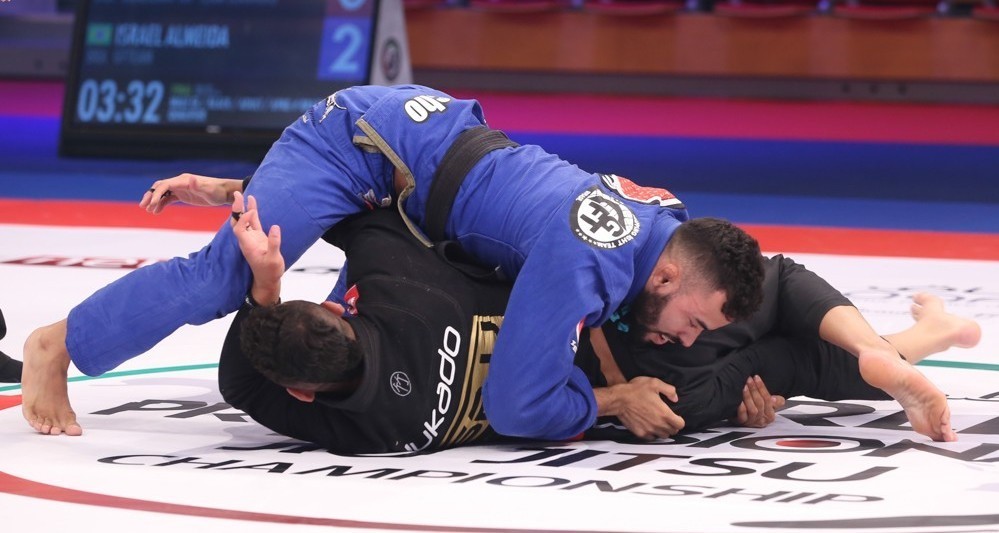 13TH ADWPJJC: BLACK BELT ACES FIGHT TO THE END IN COUNTRY QUALIFIERS TO SECURE THEIR SPOTS IN THE MAIN BRACKETS

56kg – Nathanael Fernandes beat three very well known competitors on his way to the main bracket. First he beat Thalison Soares for scoring last in a 4-4 tie. Then he beat Oziel Carvalho 1-0 to meet Rodnei Junior. A 2-1 lead took Nathan to the main bracket.

69kg – Israel Sousa kept his dream of a second gold medal in a row by qualifying for the main bracket in three matches. He beat Thiago Macedo 2-0, finished Diego Medeiros and beat Leo Saggioro 5-2 in a thrilling final.

77kg – Total control. That's how Micael Galvão made his way to the main bracket. He finished Francisco Diego, beat Leo Lara 9-0 and caught Julio Cezar Jr with a choke from the back in the final.

85kg – Isaque Bahiense is on his way to defend his title. He made it to the main bracket by finishing Elias Costa with a choke from the back. Then he beat Igor Souza 5-2. In the final, Isaque secured the spot with a referee decision win over Catriel Fernandes following a 0-0 tie.

120kg – Gutemberg Pereira fought twice to secure his spot in the main bracket. He beat Tacio Carneiro 1-0, then beat Wallace Costa via WO. The final was against Ricardo Evangelista and Gutemberg found a choke from the back to win. 49kg – Vanderlucia Barbosa never quit! In three matches, she secured her spot in the main bracket by finishing Tatiane Nunes and beating Flavia Bastos 5-3. The final challenge was the toughest, as Vanderlucia found an armbar/triangle to finish Diana Teixeira in the final seconds.

55kg – Bia Basilio wants her 4th gold medal in the ADWPJJC. Her run started with two wins in the qualifier. First she beat Dayane Bazzoni via WO and then faced a tough opponent in Leticia Muramaki to win via referees decision.

62kg – When six-time ADWPJJC champion Bia Mesquita wants a spot in the main bracket, it is hard to stop her. In three matches, Bia finished Vitória Vieira, beat Deborah Costa via WO and finally outscored Gabriela Pereira 1-0.

70kg – Three matches for Larissa Dias to secure her spot in the main bracket. She beat Rafaela Bertolot 5-0, Izadora Silva 1-0 and Thalyta Silva 2-0 in the final.

95kg – Gabrieli Pessanha had the toughest of challenges to make it to the main bracket. She had to beat 2-time ADWPJJC champion Tayane Porfirio in a best of three bracket. The first match was close and Gabi won via referees decision. The second match was all thrills, as Tayane went ahead 3-0 with a guard pass and Gabi scored four points to win the very last seconds.