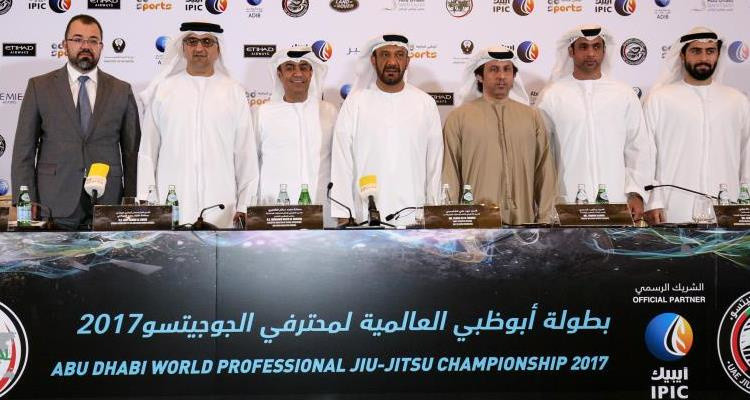 World-class athletes descend on the UAE capital to compete for world titles and a prize fund of up to AED 3 million.

A full schedule of initiatives and workshops related to the 2017 ‘Year of Giving’ to run alongside event.

The ninth edition of the Abu Dhabi World Professional Jiu-Jitsu Championship will welcome back the world’s elite to the recognized ‘home of Jiu-Jitsu’ for two weeks of gripping competition. More than 7,000 competitors from over 100 countries will descend on Abu Dhabi to fight it out for world titles and a prize fund of up to AED 3 million.

H.E. Abdulmunem Al Sayed Mohammed AL Hashmi, UAE Jiu-Jitsu Federation Chairman said of the 2017 event: “Since its inception, the Abu Dhabi World Professional Jiu-Jitsu Championship has gone from strength to strength and is gaining prestige on the world stage. This year we will see even more participants than ever take to the mats of the IPIC Arena across the two weeks of competition, which is a testament to the competition’s growth.

“For example, since 2013 the number of athlete’s competing in the Championship has grown on average 32% year-on-year with a fantastic overall growth of 596%. Specifically, in the UAE we now have over 250 UAE players competing, which equates to annual growth of 44% and a total growth of 1150%. We are proud to play a part in motivating aspiring Jiu-Jitsu players at local and international levels and we are committed to developing the sport across the Emirates.

“Not only this, over the past several years we have seen enormous interest in Jiu-Jitsu itself worldwide. Our attendance has peaked to over 31,000 which is an average year-on-year growth of 44% since 2013.

“The UAE’s commitment to Jiu-Jitsu over the years has undoubtedly strengthened its position as a global leader within the sport and we look forward to seeing that develop in future years to come.”

All eyes will be on the championship this April as millions of people across the globe tune-in to watch their favourite competing athletes battle it out on the floor. The competition will be broadcast on Abu Dhabi Sports Channels across the region, as well as live-streamed online and the official UAE Jiu-Jitsu Federation social media channels.

Al Saadi said: “This Championship is one of the most important sporting events, which Abu Dhabi Sports Channels is always keen to cover with the highest standards of professionalism and objectivity using the latest in international best practices and broadcasting technologies.”

Al Saadi also stressed that Abu Dhabi Sports has made the necessary preparations for covering the championship from the beginning of April, and has allocated a dedicated channel 24/7 that will air programmes, documentary films, exclusive interviews and other segments both locally and internationally.

Al Saadi noted that Abu Dhabi Sports works side-by-side with the Jiu-Jitsu Federation, officials and all stakeholders in order for the sport to attain Olympic recognition after successfully contributing to its inclusion in the World Beach Olympic Games in San Diego, the Asian Beach Games, the World Indoor Championship and the 2018 Asian Games in Jakarta.

For the first time ever, the contest will hold a dedicated Para-Jiu-Jitsu division for players with disabilities and special needs. This comes as part of a the UAEJJF’s social responsibility pledge in the 2017 ‘Year of Giving’, which also includes partnerships with initiatives such as the national health initiative ‘Jasadak Amana’ and the UAE Food Bank. Workshops will also run alongside the event covering CSR topics such as the environment, social responsibility, culture, and education, demonstrating that the event offers far more than a Jiu-Jitsu championship and will inspire the community to leave a lasting legacy.

Kicking off the world event is the Abu Dhabi Jiu-Jitsu Festival and after its success in 2016, the Festival is set to return bigger than ever with new extended dates from Monday 10th to Saturday 15th April. The festival is an opportunity for members of the UAE Jiu-Jitsu Federation and loyalty card-holders under the age of 18, plus white belts and members of the military, to compete in a world professional environment against their peers.

Following the Festival, The Abu Dhabi World Youth Jiu-Jitsu Championship takes place on 16th & 17th April. This is where the next generation of professional players will once again compete in the state-of-the-art arena for two days of inspirational competition with the chance to add points to their 2016-2017 season.

The youth activities at the event aim to teach the fundamental values of Jiu-Jitsu; courage, loyalty, respect, commitment and discipline, and outlines the UAEJJF’s motto of “Participating in building a strong generation”. The best youth players will be monitored by the UAE Jiu-Jitsu Federation throughout the competition, offering a select group support and encouragement to develop their skills.

The elite Jiu-Jitsu contest will take place from Tuesday 18th to Saturday 22nd April and will see the UAE’s ‘national treasures’ go head-to-head with a record-number of international participants from countries including Australia, Brazil, Canada, Japan, Korea, Poland, Portugal, United Kingdom and the USA. Over 360 medals are up for grabs in what is sure to be a nail-biting competition and this is an invaluable opportunity for athletes at all levels to represent their sport on a world stage.

As part of the action, fans will experience the ultimate clash of Jiu-Jitsu talent at the highest level with the Abu Dhabi World Jiu-Jitsu Legends competition on Saturday 22nd April. The Jiu-Jitsu Legends competition will see ten world-renowned contenders, both current and retired, fight it out for four gold medals. The closing day of the championship (Sunday 23rd April) will host a red-carpet awards ceremony to honor winners as well as sponsors and participating parties who have contributed to the success of the championship. Winners will be selected according to new international rankings, developed by the Federation during 2016/2017 season and based on the performance of the players in the final round of the tournament.

For those not competing, the event will see the return of the IPIC Fan Zone, a fun-filled family festival atmosphere not to be missed. The IPIC Fan Zone includes sponsor activities, family events and interactive stands, making it the perfect family day-out. The annual raffle returns, giving the public a chance to win exciting prizes including two brand new cars from Premier Motors that include a Jaguar XE and Land Rover Discovery Sport.

On this occasion, His Excellency Suhail Mohamed Al Mazrouei, Managing Director of the International Petroleum Investment Company (IPIC) and Minister of Energy, said: “We are proud that IPIC is sponsoring the Championship for the fourth consecutive year, and happy with the great successes that this championship reaches year after year. Since its launch, the ADWPJJC witnessed continuous achievements and has become a major rising sporting event in the country, which has also made Abu Dhabi the global capital of Jiu-Jitsu. We are pleased to contribute to the Jiu-Jitsu sport and lead it to such a prestigious level.”

The Abu Dhabi World Professional Jiu-Jitsu Championship will be an unequivocal celebration of the martial art across the country and outlines the region’s enthusiasm for the sport across all levels – from grassroots and community participation, to youth engagement, military use and professional sporting talent. The ninth edition promises to be an action-packed fortnight of competition and fun with something for everyone, from Jiu-Jitsu players, international fans, local followers and the general public alike.

The championship is open to all and is free to attend across the two weeks. To learn more about the event and keep up-to-date with the program visit https://www.uaejjf.com/.

“The Abu Dhabi World Professional Jiu–Jitsu Championships (ADWPJJC) has established the UAE on the global Jiu-Jitsu map as a leading player in this sport. We are pleased to have been a part of this journey and wish the federation and all the participants all success in the championships,” said Helal Hanei Omar, Vice-President, Premier Motors.

Premier Motors is the official dealer for Land Rover vehicles in Abu Dhabi and has been supporting the ADWPJJC since 2011.

“We are proud to support the Abu Dhabi World Professional Jiu-Jitsu Championship as part of our continuing efforts to promote opportunities for UAE citizens which can enable them to shine and excel in all areas of their lives. Jiu-Jitsu is truly a sport for everyone. It builds tremendous physical and mental capabilities while instilling many positive characteristics including courage, commitment and cooperation. As one of the leading banks in empowering the next generation, we are delighted to be sponsors of this world-class championship and wish all competitors the best of luck.” Nawal Al Bayari, Head of CSR Council.