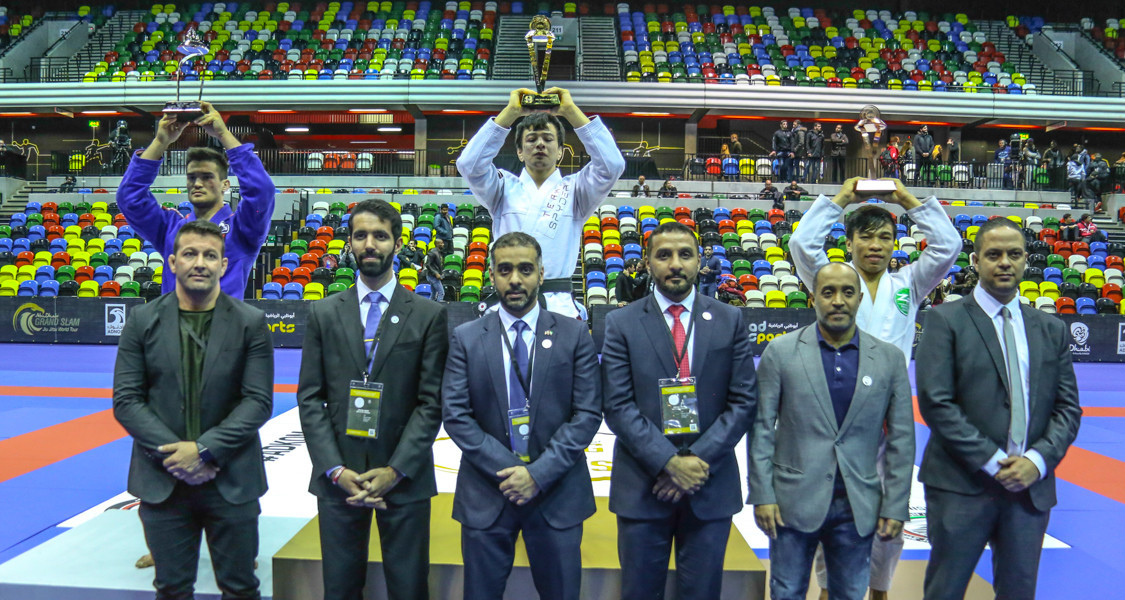 Abu Dhabi King of Mats: Paulo Miyao overcomes tough opposition to reach the top of the lightweight bracket in London

The lightweight bracket of the Abu Dhabi King of Mats has a new ruler. Brazil's Paulo Miyao fought his heart out this Sunday, March 10, at the Copper Box Arena, in London, England. In six matches, Paulo had no easy opponent, as all athletes were highly qualified to compete for the ultimate glory of becoming the lightweight Abu Dhabi King of Mats. Here's how the bracket played out until the big final.

Group A opened with Hiago George beating Australia's Lee Ting 3-0 with a guard pass. Then, on group B, American Isaac Doederlein also debuted with a bang to take the back and choke Bebeto Oliveira. Back on group A, João Gonçalves passed Japan's Nobuhiro Sawada to score a 3-0 lead and take the win. Round 1 closed on group B with Paulo Miyao outscoring Tiago Bravo 10-2 in a high paced match.

Hiago George and Gabriel Sousa met once again on group A and this time Hiago took the win via split referees decision following a 1-1 tie on advantages. Group B opened round 2 with Bebeto Oliveira beating Samir Chantre 1-0 on advantages after a 2-2 tie on points. João Gonçalves came back on group A to sweep Lee Ting and take the 2-0 win. Group B closed the second round with a an all-out battle between Isaac Doederlein and Paulo Miyao, won by Miyao by a narrow 2-0 lead.

Lee Ting opened group A with a unanimous referee decision win over Nobuhiro Sawada after a 0-0 tie on points. Isaac Doederlein was back to group B with a 3-1 lead on advantages to beat Tiago Bravo. Gabriel Barbosa won one more on group A, this time a 1-0 lead on advantages over João Gonçalves. Paulo Miyao closed group B and his group stage campaign with a 3-0 win over Samir Chantre.

Teammates Hiago George and Paulo Miyao put their friendship to the side and battled for a spot in the final. After a 4-4 tie on points, a narrow 1-0 lead on advantages was enough to take Paulo to the gold medal match.

Isaac Doederlein proved he meant business in the bracket when he caught Gabriel Sousa with a wrist lock and qualified to the big final.

In the third encounter of the weekend, Gabriel Sousa and Hiago George battled it out for a spot on the podium. Sousa kept one step ahead of George and finished the match with a 6-4 lead that granted him the third place.

Isaac Doederlein tried to beat Paulo Miyao three times during the weekend, but came short in all three. In the gold medal match on Sunday, it was as close as it can be. After six minutes of action, a 4-4 tie on points stayed on the scoreboard. Two out three referees decided in favor of Paulo Miyao to grant him the title.

The 2018/2019 season of the Abu Dhabi Grand Slam Jiu-Jitsu World Tour is completed. Now it's time to prepare for the 2019 Abu Dhabi World Professional Jiu-Jitsu Championship, scheduled April 20-26, in Abu Dhabi. The registration period is open to all age and skill levels. Hurry up and sing up now. More info at uaejjf.org.