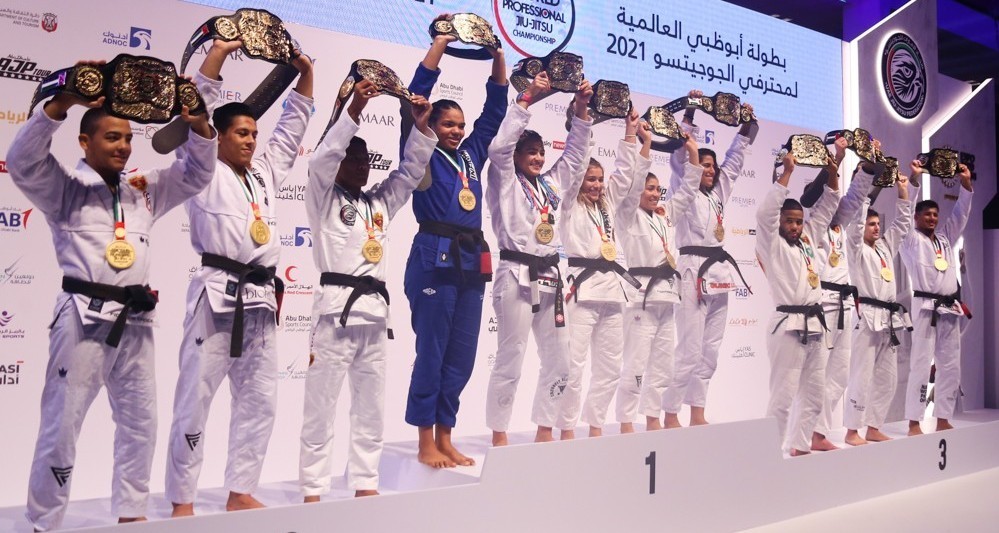 The 13th edition of the Abu Dhabi World Professional Jiu Jitsu Championship ended in the best way possible, this Friday, November 19. Twenty four of the best competitors in the world gave their absolute best in order to achieve the ultimate goal, which is to become a black belt ADWPJJC champion.

The 12 weight classes at play provided the crowd with top notch technique and hair-raising thrills. The men and women on the mats spared no effort in search of their dream. Here's how each division played out.

56kg – Nathanael Fernandes and Francisco Jonas Andrade opened the day of finals with a very strategic match where no one wanted to give away the opportunity for the opponent to score. With strong guards, Nathan and Jonas engaged in a sweep battle that ended with a 9-7 lead for Nathan and his first belt in the ADWPJJC.

62kg – Diogo Reis confirmed once again he is one of the best competitors in his weight class at this moment. The final against Georgia's Giorgi Razmadze saw Diogo control the actions from beginning to end and build a 5-2 lead to win his first belt in the ADWPJJC.

69kg – One sweep meant the second belt in the ADWPJJC for Argentina's Pablo Lavaselli. In a very close match against Brazil's Israel Almeida, Pablo took the opportunity to unbalance his opponent and go ahead 2-0 on the scoreboard. As the time ran out, all Pablo had to do was to celebrate. 77kg – Solid and in control. That's how Micael Galvão earned his first belt in the ADWPJJC. The final against Norway's Espen Mathiesen presented Micael with all the challenges of a high level match. Even so, he found a foot lock to secure the title.

85kg – Isaque Braz had a mission to accomplish and he worked hard for it. In the final, he controlled the actions to build a 7-0 lead on Australia's William Dias. A guard pass closed the deal at the end of the match. It's Isaque's third belt in Abu Dhabi.

94kg – Erich Munis played smart and kept away from Poland's Adam Wardzinski's dangerous sweeps. With that, he was able to build a 4-2 lead and take home his first belt in the ADWPJJC.

120kg – Gutemberg Pereira knew what he had to do and wasted no time in doing it. He quickly built a dominant 1-60 lead on Walter dos Santos to secure his second belt in the ADWPJJC.

49kg – It's not easy to win back-to-back titles in the ADWPJJC. Brenda Larissa did it with tons of competence and drive. In the final, she played a smart match against the always dangerous Eliana Carauni, from Argentina. After a 1-1 tie, Brenda took the belt home by referee's decision.

55kg – The dream finally came true for Ana Rodrigues. After almost making it in the past, the Brazilian took the belt home with a flawless campaign. In the final, she took control of the match and beat Dutch Rose El Sharouni 4-2 for the gold medal.

62kg – Beatriz Mesquita is what you find when you look for the best. She won her 7th belt in the ADWPJJC with a campaign made of four submissions in four matches. In the final, she gave Italy's Margot Ciccarelli no chance and finished with an Ezequiel choke from the guard.

70kg – Every edition of the ADWPJJC reveals the new face of a champion. The 13th edition revealed Ingridd Sousa as another huge talent from Brazil. In the final, she used all her skills to beat Poland's Magdalena Loska 5-2 and enter the club of belt owners. 95kg – Gabrieli Pessanha was ready for it. The final against rival Yara Nascimento was all she could think of, especially after losing to Yara in the last two times they fought. In Abu Dhabi, Gabi made the best of her guard game and managed a sweep with less than 30s left. Yara fought as hard as she could, but she was not able to revert the 3-2 deficit. Gabi is now a three-time ADWPJJC champion.